In January of 2019, we published our annual Market Outlook, which gives an overview of Maine’s Commercial Real Estate Market with an emphasis on the Office sector.

One of the most watched indicators of the strength of the office market is the vacancy rate in Downtown Portland’s Class A buildings. 25 buildings comprise the 2 million square feet in this market.  In January, we reported the market had a vacancy rate of only 1.04%, with 22,145± sf available for lease.

The building with the largest vacancy in January was One Canal Plaza, which had 7,706 sf available for lease. Since then, Stone Coast Fund Services has increased the square footage they lease in the building to over 42,000, which absorbs space for upcoming leases as well as the existing vacant space.

Here’s what a 1.05% vacancy means in terms of a day in the life of a real estate broker: In January I prepared a survey of available 3,000 – 4,500 sf class A or B+ spaces downtown for a national tenant. A couple of months later, they announced they were planning to come into town for a tour. A few weeks prior to their visit, I inquired about the spaces I had previously identified and nearly all of them were leased. I ran the search again and there were even fewer options available, but we found three that were suitable to tour. A day prior to the tour, one of the three options canceled because a lease was about to be signed on the listing. Ultimately that tenant will likely renew in place. This type of story is not uncommon in the market.

Here’s a summary of the transactions that have happened since January: 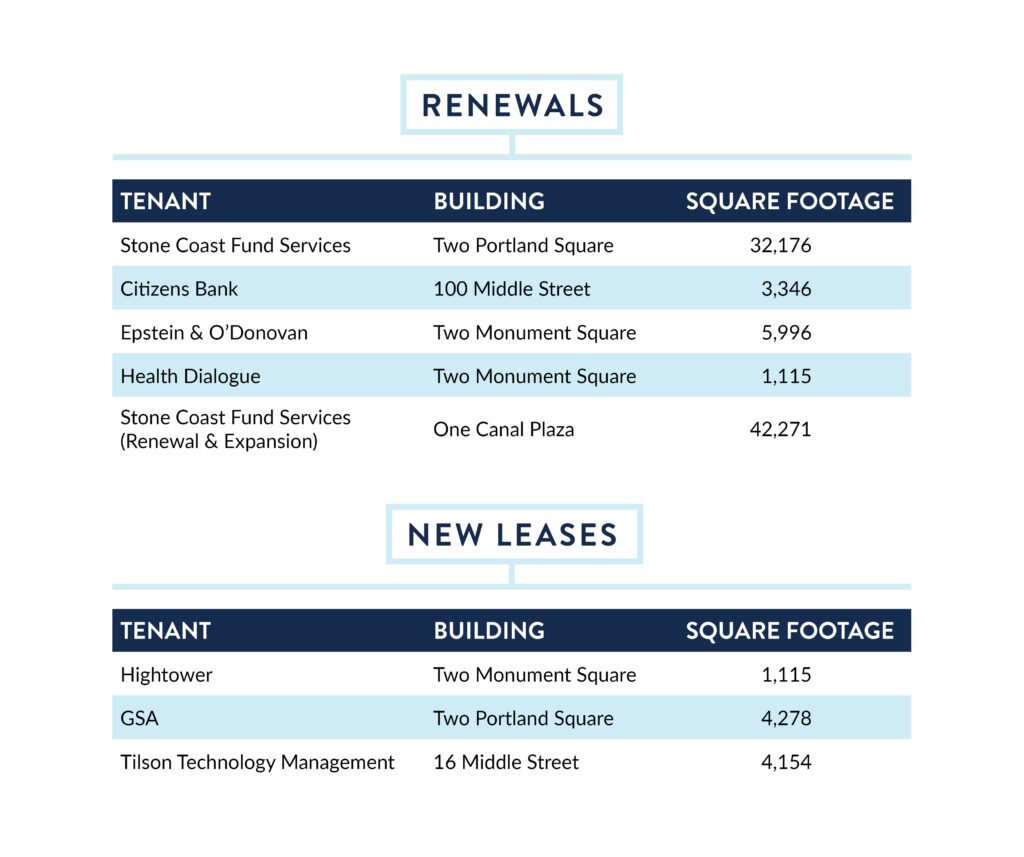 At present, the market has only 31,032 sf available, representing a 1.47% vacancy rate. It’s a slight increase from what we reported in January, however, this is still considerably below the ten-year average. The majority of the vacancy, 20,395± sf, is located in Two Monument Square. The remainder of the spaces are each under 2,700 sf and any users seeking 5,000 or more square feet of space would be advised to start their search at least a year prior to their lease expiration and be ready to pounce when suitable space opens up.

At The Boulos Company, we track users of office space and the activity in the market. Presently there are at least five companies looking for over 10,000± sf on the Portland peninsula. Some of these companies will likely end up relocating to the suburbs in order to find space that adequately supports their growth plans.

Based on the high demand and lack of supply, we anticipate announcements in the very near future regarding new construction in the office market as supply is still insufficient to meet present demand. The two buildings under construction in the India Street neighborhood are both fully-leased, so they won’t help to meet this demand.

It’s an exciting time to be in Portland’s real estate market, and we’re excited to see what the second half of 2019 brings.