Developers, owner-users, tenants, and investors are beginning to view Lewiston-Auburn as the next area of the state poised for growth, as evidenced by rising lease rates and record sale prices – and in spite of soaring construction costs.

Like in many areas throughout Maine, developers have taken notice of the housing shortage in Lewiston-Auburn. Over the past year, city officials have focused on increasing the housing stock through incentives and grants aimed to encourage new development. There are many new projects in the works or in the pipeline, as the city and developers work in unison to address the shortage.

In spring of 2021, Lewiston received a $30 million federal Choice Neighborhoods Implementation Grant, which is expected to leverage $100 million of additional development money, using tax credits and other sources. A large portion of the grant money will go to redeveloping multiple public housing sites in the Tree Streets neighborhood. Plans are in place to immediately replace 92 distressed units with 93 workforce and market rate units. Over the next few years, 185 new housing units will be built across three strategic sites, and nearly 1,500 lead-contaminated and older housing units will be replaced or rehabbed – a vital step to the city’s long-term growth and sustainability.

Misty Parker, who serves as the city’s economic development manager says, “Lewiston is the first city of its size to receive the grant, and we expect it to serve as a catalyst for increased investment in the Tree Streets neighborhood, through critical neighborhood improvements and services to residents living in the target housing units.” Parker also noted that the grant money will focus on job training, education, and healthcare access aimed at improving the quality of life for neighborhood residents. As neighborhood dynamics evolve, I would keep a close eye on this area; the new development could lead to greater economic opportunity and increased property values.

In Auburn, city officials are working with developers to grow the housing crop through economic incentives. In early 2021, Mayor Jason Levesque called for 2,000 new homes to be built within the next five to seven years. Last spring, the city listed seven city-owned properties for sale with The Boulos Company. The information for which can be viewed at www.goauburn.me/properties-for-sale.

Projects that have been completed in 2021 include 48 Hampshire Street, a mixed-income 53-unit residential building, developed by the The Szanton Company, which opened in June of 2020. There are also 48 units under development by River’s Edge Apartments at 273 North River Road and 204 Broad Street; along with Gracelawn Luxury Apartments, a 48-unit luxury apartment complex located at 10 Gracelawn Road. The owners are in the process of getting a Certificate of Occupancy for the final building of the development. The former St. Louis Church at 32 Dunn Street and the six vacant lots referenced above will spur further development, especially since projects that create a minimum of $2 million in assessable value with the district may be eligible for a credit enhancement to assist with development costs. Lastly, Auburn’s planning board unanimously approved a new 128-unit housing development by A R Building Company on Mount Auburn Avenue, next to BJ’s Wholesale Club. The four-story, two-building complex will feature a mix of one and two-bedroom units, a gym, pool, and in-unit laundry. Construction for the new complex will begin this winter or spring and will take between 24–36 months to complete.

According to Eric Cousens, Auburn’s deputy director of economic and community development, the housing shortage, along with high rents and rising home sale prices, has prevented people from moving to the city. In response, the Auburn City Council has allocated $1 million toward downtown redevelopment projects, and the city is offering incentives to spur new development – including a maximum of $250,000 per project. As a result, a record number of permits were issued in 2021. 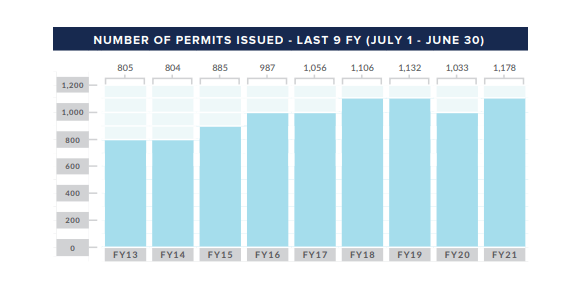 *Courtesy of the city of Auburn

The demand for industrial space continues to outpace supply, with vacancy rates at historic lows. While the cost of new construction, exacerbated by supply chain issues, poses a challenge for owner-users and developers alike, there are a few notable new projects in the pipeline: a 64,800± SF industrial building at the Promenade Mall and a 48,000± SF industrial building on Gendron Drive in Lewiston. Additionally, Valley Beverage, located at 2075 S Lisbon Road in Lewiston, received approvals for a 33,000± SF addition, leading to continued job growth.

Notable projects under construction or in the pipeline in Auburn include Futureguard Building Products’ 100,000± SF, $3.6 million expansion; the 14-building Mystique Way Cannabis Park; and N.S. Giles Foundations Inc.’s new 23,000± SF industrial building at 46 Wright’s Landing, in which 3,584 – 5,640± SF is currently available for lease with a completion date targeted for the beginning of 2022.

Lewiston-Auburn industrial lease rates have increased dramatically in the past few years. However, Greater Portland’s industrial market is even tighter, and local landlords have not had any trouble filling vacancies, as companies continue to expand north. I suspect this trend will continue in the future as tenants compete amongst each other for the limited inventory on the market.

The office sector continues to feel the impact of the COVID-19 pandemic, as remote work is still up, and many companies question the need for a large office space. In Lewiston-Auburn, there are several large vacancies on the market. I predict the vacancy rate will grow as leases expire and more companies opt for smaller space requirements to cut costs, while continuing to have a physical presence. That said, the office market is by no means dead. As companies shift to hybrid work models, office spaces will continue to exist and serve different purposes, such as epicenters for collaboration and relationship-building.

Traditionally, coworking spaces have largely been associated with freelancers, entrepreneurs, and very small companies. However, on a national scale, an increasing number of larger companies have been renting coworking space for their employees in efforts to create a more agile workplace. The state recently announced a $200,000 grant program designed to create more coworking spaces to support entrepreneurship in Maine. According to Mainebiz, “The latest investment grant aims to expand access to coworking and collaborative workspaces throughout the state, ultimately producing a range of economic benefits.” Coupled with large office vacancies throughout Lewiston-Auburn, I would expect additional coworking spaces to come online in the twin cities in the near future.

In 2019, Maine’s last Kmart store, at 603 Center Street in Auburn, shut its doors, leaving yet another massive retail vacancy. Since Kmart’s departure, Target proposed a $9.6 million renovation to the 105,000± SF space, which is expected to open in 2022. In fall of 2021, Staples opened a new Auburn location at 89 Union Street, a 23,748± SF space formerly occupied by OfficeMax. Staples left their 23,500± SF space at 855 Lisbon Street in Lewiston, providing a great opportunity for a large retailer looking to break into the Lewiston market. Construction was completed at the Auburn Marketplace, located at 1779 Washington Street South, which is directly adjacent to Exit 75. The Marketplace features 1,500± SF – 9,000± SF of retail/office space with Dunkin as the main co-tenant. Finally, the planning board approved a new Olive Garden for 649 Turner Street.

In summation, Lewiston-Auburn’s year has not been entirely rosy – a handful of new projects that were in planning stages at the point of our mid-year outlook were scrapped due to construction costs. As costs remain high, it becomes harder to make new development projects financially viable. However, Lewiston-Auburn’s pro-development environment continues to attract new projects to the pipeline, and I am excited to see what 2022 will bring. 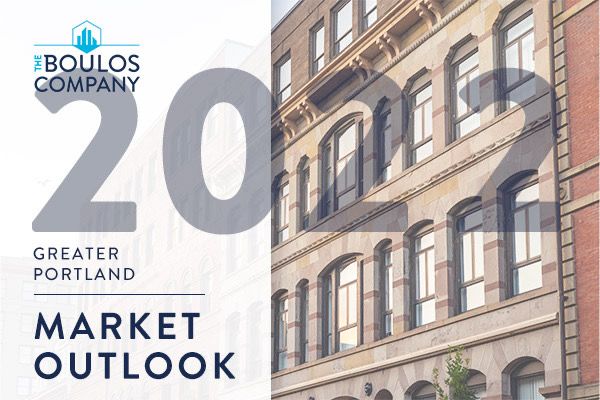