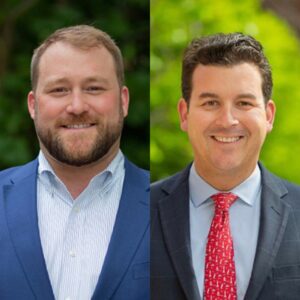 The Boulos Company is pleased to announce that Derek Miller and Jon Rizzo have been made partners. The two brokers have been with the company since 2011 and 2016, respectively. “These additions add years of commercial real estate brokerage experience to the company’s strategic decision-making team,” said Drew Sigfridson, Managing Director. “We welcome the fresh perspectives, creativity, and persistence that Jon and Derek bring. They both embody the qualities and level of commitment that we need in our company’s ownership.”

Derek Miller has found great success working in the retail sector representing both tenants and large commercial portfolios owners, his recent accomplishments include placing Johnstone Supply in their new location at 238 Riverside Street in Portland, and subleasing their former location in remarkable time. Miller, along with Brice O’Connor and Chris Paszyc of Boulos were recently selected to exclusively market and lease 100 Rock Row – a 200,000 square foot planned office tower which will kick off phase 2 of Rock Row, a 1.3 million square foot mixed-use development in Westbrook. The location will be the first office building in Maine constructed from cross-laminated timber. When he’s not putting deals together, Derek can be found at Sugarloaf or enjoying Portland’s downtown.

Jon Rizzo has become a top-producer in Maine’s industrial market, and has been involved in over $140 million in sale & lease transactions since joining the firm. Among Jon’s notable projects is the Innovation District at The Downs, a light industrial-focused business park within the massive 524-acre mixed-use development – a project that has seen tremendous success since its launch. Nearly 95% of the buildable lots at the Innovation District are sold or under contract, with over 500,000 square feet currently developed, under construction, or in the planning stage. Outside of work, Jon is actively involved in his community, spending his time exploring Maine’s outdoors with his wife and two sons, and coaching tee ball.

About The Boulos Company:

The Boulos Company is a Maine and New Hampshire commercial real estate firm dedicated to serving owners, investors, and tenants, blending Maine and New Hampshire market knowledge with global networks through CCIM and SIOR. Founded by Joseph Boulos in 1975, the firm has grown to include more than 30 Portland, Maine and Portsmouth, New Hampshire-based team members. More information is available at boulos.com.