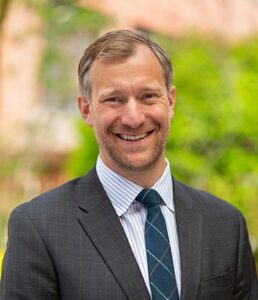 It should be no surprise to anyone that the Greater Portland office market was affected by the pandemic in 2020. When The Boulos Company began our annual market survey of 12 million square feet across 350 Class A and Class B office buildings, we didn’t know what to expect. It was obvious that demand had dropped and supply was increasing at a steady rate since June, but we were surprised by the results. The total direct vacancy rate, not including sublease space, increased from 6.34% up only to 6.97% in 2020, still a very healthy rate considering the circumstances and still lower than any time from 2008-2016.

Different submarkets fared better than others 2020, but many in the industry expected worse. As expected, the amount of sublease space on the market increased dramatically from just 40,000± SF in 2019 up to 212,276± SF in 2020. While this may seem like it would have a major effect on the overall market, the total vacancy rate, including sublease space, increased to 8.70% from 6.66% in 2019. For reference, total vacancy rates from 2008 until 2015 never dipped below 9%.

While the strength of the downtown Portland submarket kept the overall vacancy rate from climbing too high in 2019, the opposite occurred in 2020. The downtown market was hit the hardest compared with all other submarkets as the total direct rate jumped from just 4.14% up to 9.92% over the course of 12 months. Once spaces offered for sublease are included, the overall vacancy rate is 11.77%. While the majority of sublease space is in Class A office buildings, this increase in the direct rate was not concentrated to a single property type and included both Class A and Class B buildings. Specifically, Class A downtown office space increased from a historic low of 0.40% in 2019, with only a few small vacant spaces, up to 6.60% in 2020 and included significant vacancies of 60,000± SF at 300 Fore Street and multiple vacancies over 10,000± SF elsewhere. Class B office space increased from 7.72% up to 13.32% due to multiple vacancies in the range of 2,500-7,500± SF and 38,000± SF of vacancy at 29 Commercial Street. These are dramatic increases in a very short amount of time. While these figures are similar to 2014 and 2015, this is the single largest increase over a 12 month period that The Boulos Company has recorded over the 23 years of surveying the market. 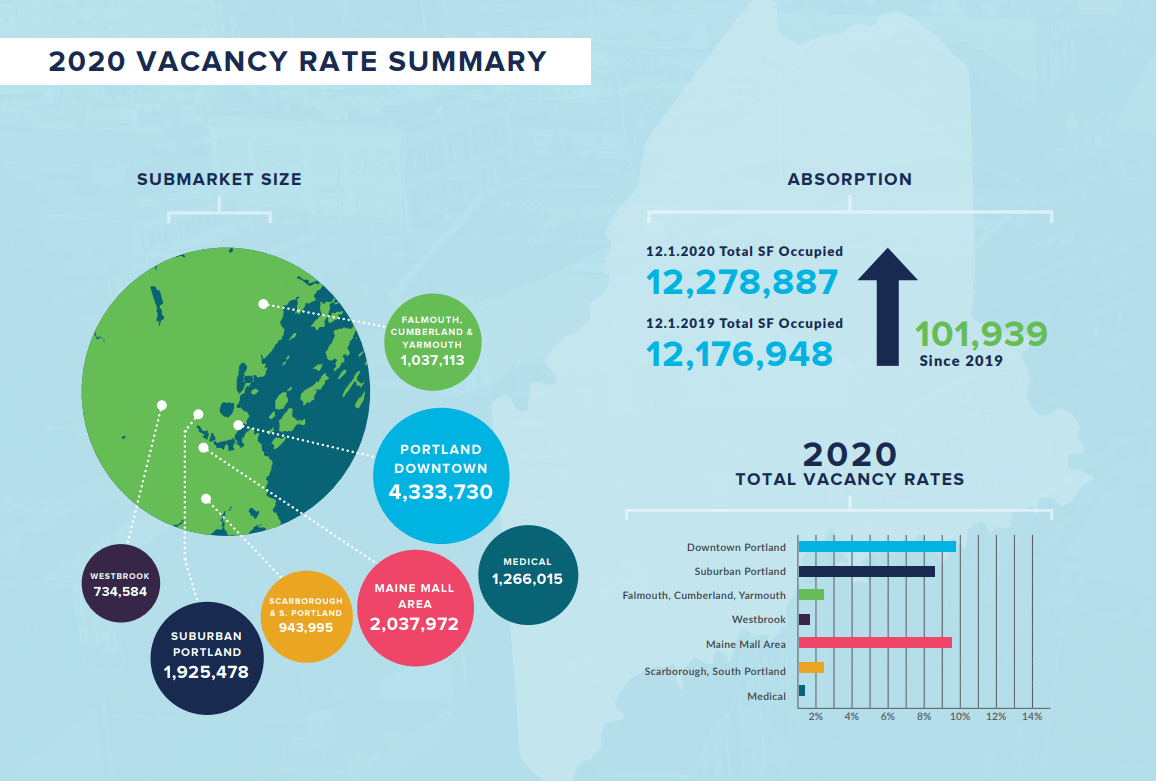 Despite the drop in transaction volume and demand in 2020, the number of significant transactions increased downtown as opportunities became available which included Certify leasing 53,656± SF at 320 Cumberland Avenue, 20,000± SF leased by Roux Institute at Northeastern University at 1 Hancock Street, Marcum LLP leasing 14,212± SF at One Canal Plaza, and ESRI leasing 10,308± SF at 75 Washington Avenue. New construction took a hit and a couple new construction projects that were in lease negotiations were stalled in 2020. The one exception was the new 100,000± SF Sunlife building at Portland Foreside. Besides this one transaction, which was completed before the pandemic hit, it could be 12-24 months before any new leases are signed to spur significant ground up development, depending on how the market rebounds from the sharp increase in downtown vacancy rates.

It is evident that the downtown market suffered over the last 12 months but, surprisingly, the suburban submarkets—which include Class A and Class B buildings in Suburban Portland, Maine Mall Area, Westbrook, South Portland/Scarborough, and Falmouth/Cumberland/Yarmouth—had an overall decrease in vacancy rates from 8.75% in 2019 to 6.29%. Last year, the amount of vacant space more than doubled; however, in 2020, only one market had an increase in the vacancy rate out of the 10 suburban submarkets and this increase was minimal. The major increase to the direct rate from 2018-2019 was largely due to just a few significant vacancies hitting the market, and 2020 remained largely unchanged. One of the drivers for the increase in rates in 2019 was UNUM downsizing and vacating 200,000± SF at 2211 Congress Street. However, BerryDunn signed a lease for 40,000± SF in this building. BerryDunn’s relocation from downtown Portland was one of the drivers in the drop of overall vacancy rates. 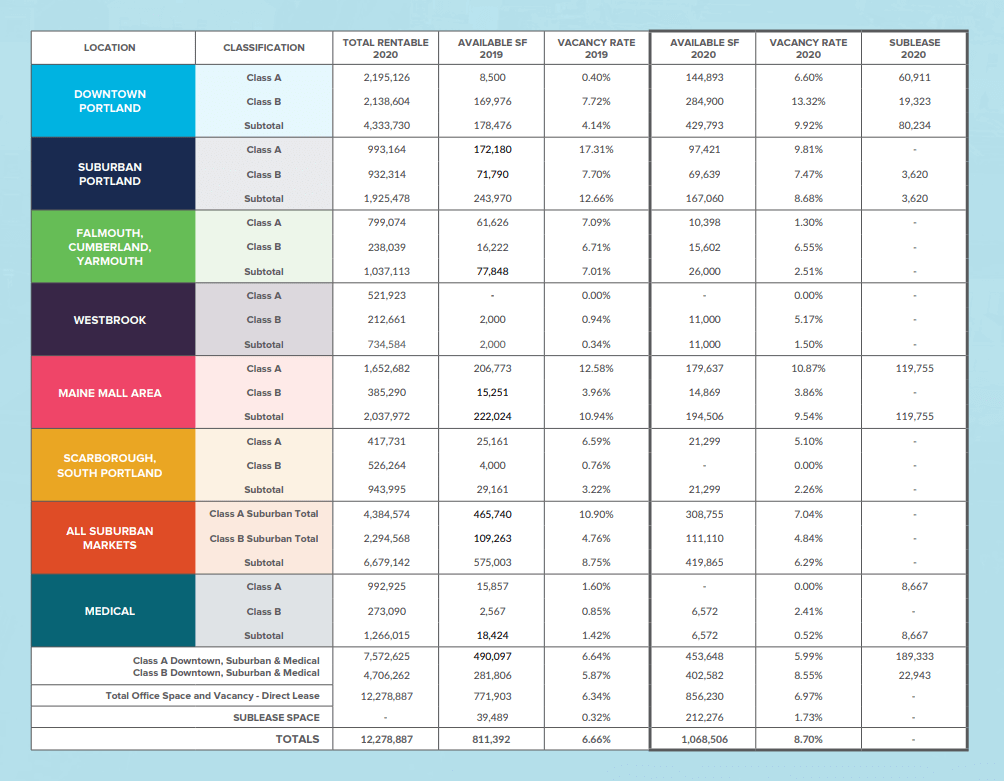 The medical office market continued to be very strong in 2020, with little evidence that the pandemic had an effect on vacancy rates. This is a trend that has continued for the last seven years, as the Class A and Class B vacancy rate fell to 0.52% with just two small vacancies at the time of our survey. Maine Medical Center is undergoing two major expansion projects at the Portland and Scarborough campuses—otherwise larger medical office users did not make any major moves in 2020. Currently under construction is the 62,000± SF VA Maine outpatient clinic on West Commercial Street in Portland, which will be added to the market in 2021. While demand for medical office space fell slightly with the overall office market, smaller private practices continue to struggle to find existing medical office space and are forced to convert standard office space or pursue new construction, both at a significant expense. Medical occupiers had to make quick, temporary changes to their facilities once the pandemic hit, and it is yet to be seen how the pandemic will affect large-scale medical office space in the years to come. It is expected that the same medical office functions will require more space, which may result in expansions and new construction supporting another strong year for this market in 2021. 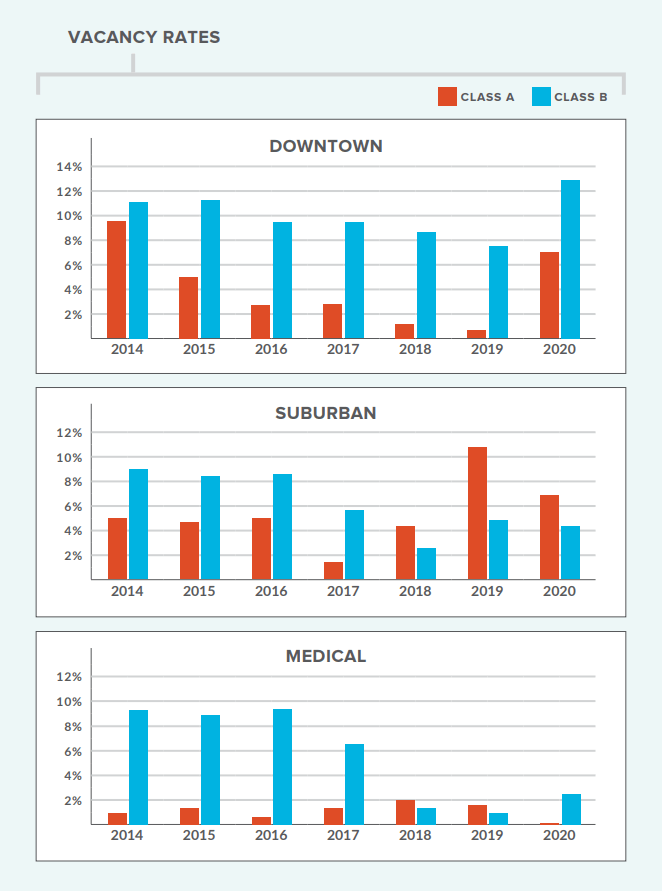 Landlords and tenants alike in the office market want to know what the future of office space will look like and how that may affect occupancy rates in the future. It might be too early to tell, and the big question is whether demand will return when office occupiers can plan better in their space programming. Almost half of the lease transactions in 2020 were renewals—indicating tenants preferred to stay put in 2020—which may lead to more movement within the market in 2021. It is unlikely physical offices will be affected like they will be in larger metropolitan cities, and there will be a return of employees to the office in Greater Portland.

However, the downtown market can not likely absorb the 270,000± SF of additional vacancy created last year when the market has only absorbed about 40,000± SF per year, on average, over the past three years. The downtown rates will go down, but not back to 2017-2019 levels—at least within the next 12 months. In addition, there do not appear to be any major vacancies on the horizon in the suburban market and the large amount of sublease space doesn’t hit the direct market in 2021 so, without any surprises, we can expect suburban rates to remain steady and perhaps improve slightly. In all, we can expect a little more stability in the office market in 2021 and, hopefully, fewer surprises.