2021 marks the 21st Seacoast NH Market Outlook published by The Boulos Company. Since 2000, the industrial market typically has not changed much year over year. Yes, the vacancy rates or asking lease rates would vary slightly up or down, but we have never experienced anything close to the changes we have seen in 2021 – and we expect more to come as we head into a new year.

As of December 15, 2021, the Seacoast vacancy rate was 2.3% – a decrease from 3.9% at year-end 2020. Most of that vacancy, 63%, can be attributed to one building in Durham. That one building, located at 121 Technology Drive, sold in October to R.J. Kelly Company. At the time of the sale, the entire 263,000± SF of industrial/warehouse space was vacant. According to the broker representing the new owner, they have five industrial/ warehouse tenants actively pursuing the vacancy and the expectation is that all 263,000± SF, plus additional expansion space, will be leased by the spring of 2022. If those expectations materialize, there will be less than 1% of industrial inventory available in the New Hampshire Seacoast.

The low vacancy obviously tells one story, but the most impressive change has been the increasing asking lease rates, which have increased by more than 60% in some towns in just the past year. One prime example is the 121 Technology Drive building in Durham which is highlighted above. The asking lease rate under the new ownership is $11.75/SF NNN, which is an increase from $6.75/SF in 2020. The other large vacancy in the Seacoast is 131 Portsmouth Avenue in Exeter, which was recently purchased by an investor. The asking lease rate for this 75,747± SF industrial building is $11.75/SF NNN. In some cases, the asking lease rates are approaching, or exceeding asking office rents, which is something we have never seen before. 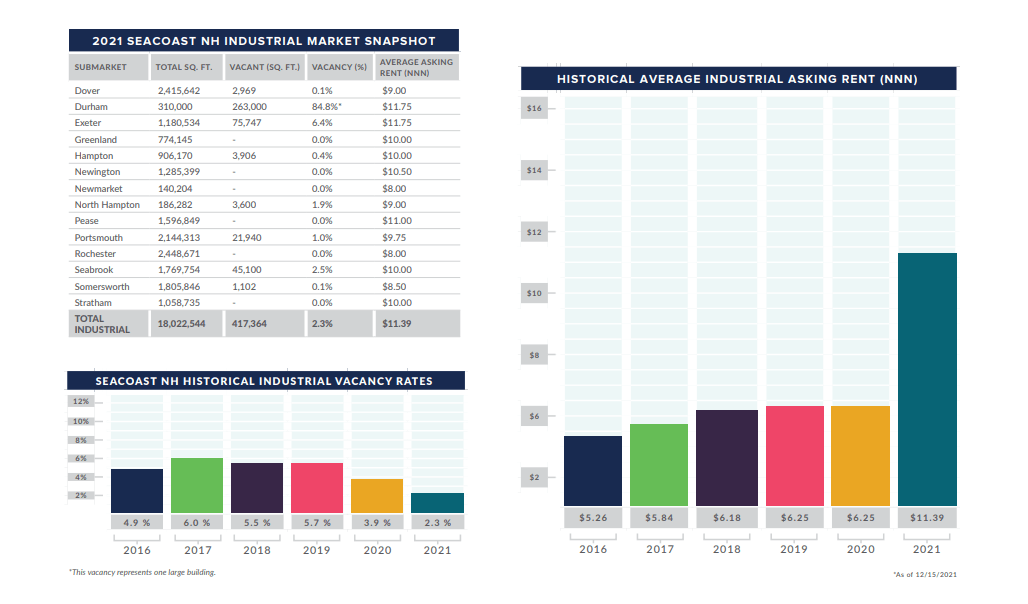 What is causing this unprecedented change? Well, there are a few factors. Disruptions to global supply chains during COVID-19 have forced companies to store more inventory onsite, while also growing to meet increased demand. Furthermore, these supply disruptions from overseas have companies shifting some of their manufacturing back to the USA. We have also seen an uptick in out of state companies looking to the Seacoast for space because of low inventory and accelerating lease rates in other parts of the country as well.

What to do? Build more buildings? Sounds easy, but with the lack of good industrial land with the correct zoning and good access, there aren’t many options, especially along I-95. Furthermore, much of the current demand is immediate and waiting 12-18 months for a new building isn’t an option. Having said this, there are a few new development projects in the works for companies that have time on their side. We should also see adaptive reuse of retail or office buildings. As the office and retail markets change because of COVID-19, there may be opportunity to convert these properties to industrial use. This would pose some challenges with zoning, low celling heights, access, etc. but companies are being forced to look at every option.

So, what can we expect in 2022? Unfortunately for tenants and fortunately for landlords, more of the same. Vacancy rates will remain extremely low and lease rates will continue to increase – although there will be a ceiling to these asking rents beyond which tenants cannot justify. This will prove especially true as those asking rents start to compete with costs of new construction. The adage of “Supply and Demand” really does apply to the New Hampshire Seacoast. Unfortunately, because of the lack of supply, local companies may be forced to expand or relocate to other parts of the country. Long term, this may be the biggest impact to the local economy. Time will tell.