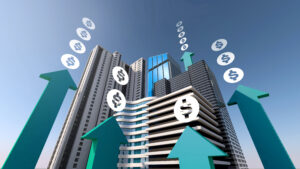 Unless you’ve been avoiding economic news for the past 6-12 months, you’re aware that in general, interest rates have been rising aggressively, particularly throughout the second and third quarters of 2022. As we write this article near the end of Q4, it is possible that rates will continue to climb higher before they eventually level off.

For those who’ve been living under a rock: The Federal Reserve Bank, “The Fed”, has been raising interest rates to cool the rampant inflation caused by an economy that’s too hot for its own good. The Fed sets interest rates through the purchasing of U.S. Treasury bills and notes. The Fed buys these securities in the open market through its Federal Open Market Committee, or FOMC. The FOMC sets a target for the federal funds rate, which is the rate at which depository institutions lend balances at the Federal Reserve to other depository institutions overnight. When the Fed wants to raise the federal funds rate, it either buys fewer securities or sells them on the open market, which reduces the money supply and raises rates.

How does the federal funds rate impact the people who borrow money? Here’s how it works: when the federal funds rate goes up, other interest rates, like the prime also go up. That’s because banks usually peg these rates to the federal funds rate, and the changes trickle out to the rates that banks use to lend money out to consumers and businesses. So, when the fed raises its benchmark rate, other banks quickly follow suit with their own rates. The goal is that as the cost of borrowing money goes up, people and businesses borrow less, in turn, they spend less, and inflation cools down. The bottom line is that when the Federal Reserve raises interest rates, it becomes more expensive to borrow money. The current federal funds rate as of November 11, 2022, is hovering between 3.75-4%, and the Wall Street Prime rate is 7%, up from 3.5% this time last year.

The news frequently reports on interest rates regarding one of the lending rates that is most impactful to consumers: the 30-year fixed mortgage interest rate. As of 11/18/22, the nationwide average 30-year fixed rate is 6.89% – Down from a recent high of 7.24% just last week, but substantially higher than even early August when the average rate was 5.52%, and the year prior when you could easily get a 3% mortgage. The national average seems to be holding true for rates offered in the state of Maine, though there do appear to be local banks offering better than average rates.

This means that buying a house is much more expensive than it was a year ago, or even half a year ago, but what does all this mean for commercial real estate? Brokers at the Boulos Company and our clients are seeing commercial loan rates for purchasing commercial properties frequently quoted in the range of 6.5-7%. And while this article will be out of date the moment it goes online as rates are moving frequently, it is likely that rates will be higher in the coming months. This increase in CRE loan rates has had a few noticeable impacts on the industry in Maine.

Inevitably, increased rates lead to lower valuations, as they make purchasing investment properties less profitable at their recent valuations. While Maine has had a great year for commercial sale transactions in 2022, and transactions are still frequent, the uptick in rates is, at the very least, thinning competition around properties that may have sold with more competition a year ago. While there is still a strong desire among many owners to sell while in a hot market, the conditions for doing so aren’t quite as favorable as they were previously. For buyers, banking relationships are now more important than ever, as banks don’t necessarily offer their rock-bottom rates to just any buyer. Buyers with long-standing banking relationships have been able to work with lenders who trust them to secure rates that they may not be able to get elsewhere. And securing a rate that comes in under average could be the difference between making an otherwise thin deal pencil out, or needing to move on to find one that does.

For tenants and landlords, in some respects, these rate increases may be moving things in a positive direction. The tenant buildout & construction process has been a bit of a mess since the onset of COVID. Incredibly high demand for construction (not just in commercial but in the residential world as well), and the low availability of skilled labor hasn’t just led to high construction prices – It’s led to very long wait times for tenant buildout projects & renovations across the board. Even simple projects have recently taken so long to schedule and execute that they can add substantial time to a tenant’s commercial leasing timeline. While the cost of construction materials doesn’t seem to have fallen substantially, and the labor market is still tight, the demand for these projects does seem to be waning in the advent of rising interest rates. Anecdotally, this has led to some contractors now having more slack in their schedules, allowing for a more reasonable timeline for them to provide bids for and schedule commercial buildouts. While the rates borrowers are charged for commercial real estate construction loans have unfortunately risen along with other rates, if this trend continues, it should provide for a smoother, and less stressful commercial leasing process for tenants, and hopefully more predictable construction timelines for all involved in the process.

In summary: Interest rates continue to climb higher, and they’re having the Fed’s desired effect, but that effect isn’t all bad news. The decreased level of competition around properties could spell opportunity for some buyers. And the overbooked schedules of contractors are finally starting to loosen up, providing increased availability for much-needed tenant buildout projects. There’s even some early talk that the most significant rate hikes are in the rear-view mirror. As the interest rate landscape continues to evolve and you evaluate your commercial real estate needs, don’t hesitate to reach out to The Boulos Company so we can continue to update you on both sides of the coin.